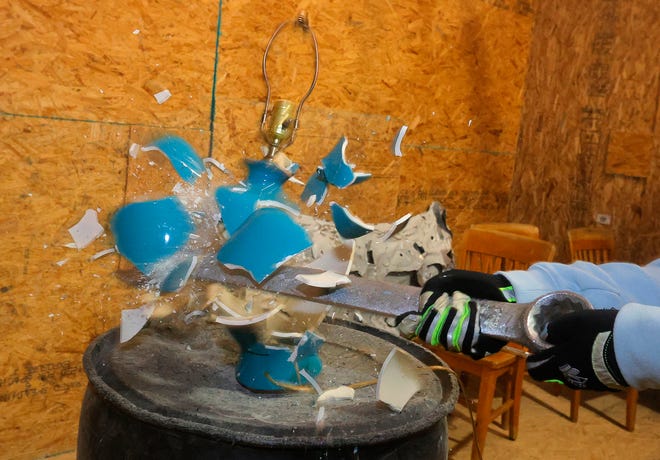 Initially, it looked like an entertainment business that started in Rochester would be a smashing success in Syracuse at Destiny USA.

The second location of Smash Therapy, which for fees of $15 to $55 lets people vent frustration by destroying dishes, electronics and even car windshields with crowbars, baseball bats and sledgehammers, opened May 1 at the mall, New York state’s largest.

The public reception “was outstanding,” said co-owner Steven Shortino. “We were sold out the first two days a week in advance” and had to turn away around 30 groups that showed up without reservations, he said.

But almost immediately, noise generated by the attraction became an issue. And on May 3, mall management informed Shortino and business partner Jerod Schoonmaker that Smash Syracuse would have to operate during mostly non-mall hours.

“That pretty much eliminated the walk-in traffic, which was the main reason we were there in the first place,” Shortino said. Advance bookings also dropped off.

So, on June 28, less than two months after its grand opening, Smash Syracuse announced on Facebook it was vacating the mall, having failed to receive “the neighborhood welcome we had hoped for.”

On July 5, it revealed that its new Syracuse location will be in Westvale Plaza, less than three miles from Destiny USA. The spot, in a former Hallmark store, has just one neighbor, a vacant supermarket, so, “we will be able to operate under normal hours and be AS LOUD AS WE WANT,” proclaimed another Facebook post.

A build-out of the space is underway, and the hope is to open in about a month, Shortino said.

Syracuse had been on Smash Therapy’s radar for some time.

The business launched in 2018 in Henrietta, and it wasn’t long before Shortino noticed that the niche enterprise, located in the Frontier Commons plaza off Jefferson Road, was drawing a fair number of customers from other upstate cities including Buffalo, but more so from Syracuse — and not just students, as you might expect.Your stories live here.Fuel your hometown passion and plug into the stories that define it.Create Account

“We were getting all kinds of people (from Syracuse),” he said, and saw an opportunity.

In discussing expansion plans, he and Schoonmaker thought, What better place to open a second location than Destiny USA? It’s geared toward entertainment and offered something the original spot in Henrietta doesn’t: significant foot traffic.

Smash Syracuse leased a spot on the shopping center’s second level. Chosen by mall management, it wasn’t far from Apex Entertainment and Escape the Mystery Room.

Shortino’s understanding is that the complaints came from adjacent non-entertainment retailers.

Nikita Jankowski, a Destiny USA spokesperson, said she was not directly involved in conversations about the issue but was told that customers were complaining to those businesses.

Shortino said noise coming from Smash Syracuse “was fairly loud. But I don’t think it was unbearably loud or too far out of line,” especially because malls tend to be noisy, he said.

“When a venue becomes a nuisance to its surrounding tenants and disruptive to providing an enjoyable experience for our guests, we listen to and act on that feedback,” Aiden McGuire, director of corporate communications for Pyramid Management Group, which owns the mall, wrote in an email.

Shortino and Schoonmaker added sound-muffling measures, including rubber floormats. In addition, “We got rid of some of the tools, the sledgehammers,” Shortino said.

They looked into installing a $7,000 noise-blocking curtain in front of the business. However, having already spent $60,000 to convert the space into four “rage rooms” and a locker room, they weren’t keen on investing more money, especially since “we never got clear answers” about what level of improvement would fully satisfy mall management, Shortino said.

His impression was that whatever they did, Destiny USA reserved the right to keep Smash Syracuse operating at off hours based on the perceived noise level.

“They didn’t outright kick us out,” Shortino said. “I do credit them for not kicking us out after the second day. But they were not willing to work with us how we would have liked them to.”

He added that Destiny USA knew what the business was about from the get-go but subsequently decided “we were a mistake on their part, and they just wanted to forget about it.”

As for the mall vacancy created by Smash Syracuse’s departure, “We’re looking forward to replacing the venue with a brand we know our guests, and tenants, will be pleased with,” McGuire wrote.