Oh deer! Deer smashes through a window at iSmash in Syracuse (video) 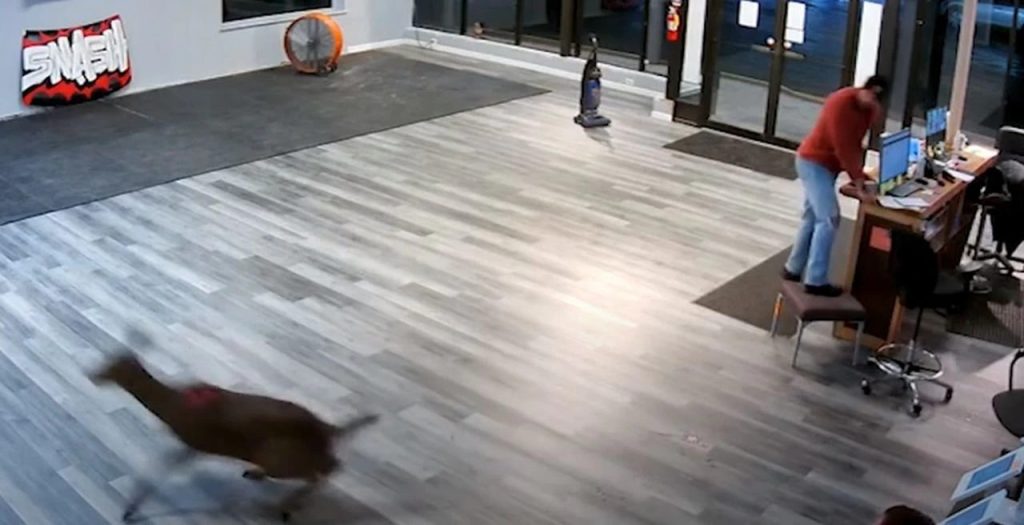 Syracuse, N.Y. — A Syracuse business where you go to have fun smashing things got a surprise smashing of its own Sunday evening.

A deer burst through one of the front windows and flailed around the front room, making a lot of noise with its hooves and causing people to scatter.

“Boom. It was in our lobby,” said Sean Mooney, who is the general manager at iSmash at 2104 W. Genesee St.

Mooney was escorting customers to one of the rage rooms – where people go and smash glass, electronics, and even windshields. He said he heard the giant crash and out of nowhere the deer was coming through the window.

A surveillance video captured the deer scrambling right behind a desk where co-owner Jerod Schoonmaker was working on a computer, prompting him to jump onto a stool to avoid the animal.

Mooney urged customers to stay back and called 911.

Once police arrived they opened the back door and Mooney said he clapped his hands to spook the deer out. It ran off into the backwoods, he said.

The deer was bleeding a little, but Mooney said it seemed ok.

Two groups of customers were in the business when it happened, he said.

“Our priority was to protect customers,” Mooney said, adding no one was injured by the deer or the flying glass.

Mooney said herds of deer are often in the parking lot in the mornings and evenings but they’ve never had trouble with one until now.

“It was just a freak of nature,” he said.

Editor’s note: The video that captured the deer smashing through the window says it happened Monday, but the incident happened on Sunday.