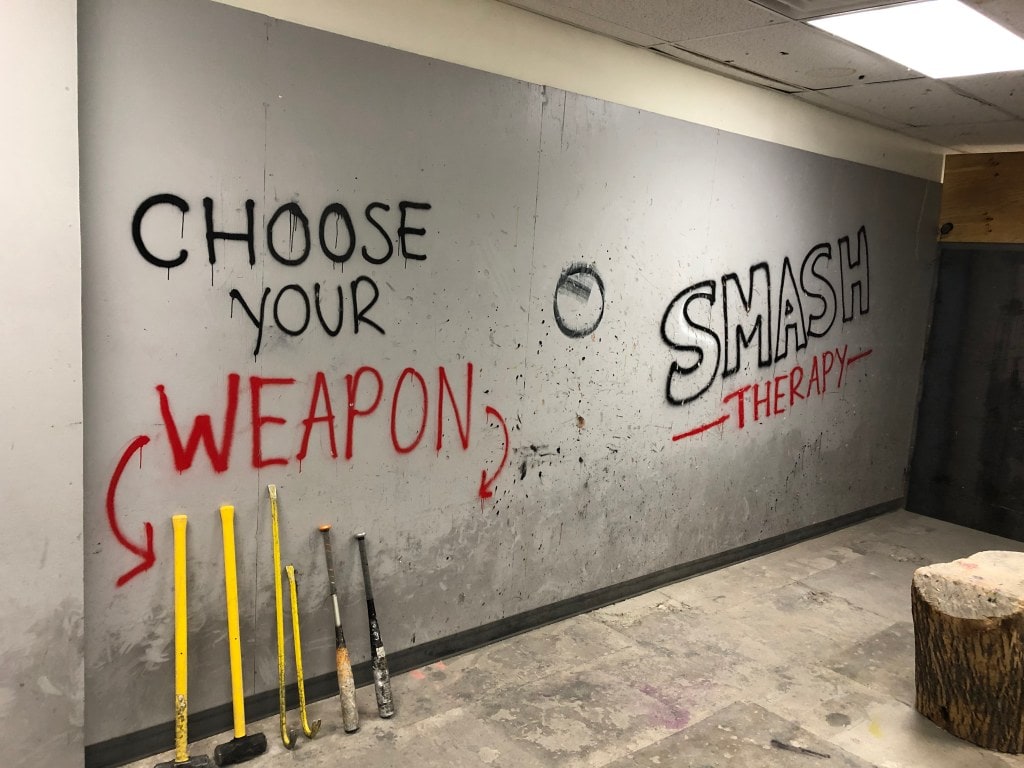 In the movie Anger Management, Dr. Buddy Rydell, an anger management therapist played by Jack Nicholson, is quoted saying “Temper’s the one thing you can’t get rid of by losing it.” Steven Shortino, owner of Smash Therapy, highly disagrees.

Smash Therapy is located at 1225 Jefferson Road in Rochester and is not your typical therapist office. Instead of lying on a couch and telling someone how you feel, you get to take you frustration and anger out on objects.

Smash Therapy is a new phenomenon that has made its way to Rochester. Much like the popular “escape rooms” Smash Therapy is a “rage room” where people can go and spend money to wreak havoc and cause destruction in a controlled environment. People can choose different packages to purchase. Some include electronics, glassware, car windshields and more.

When you show up at your reserved time you are brought into a room where you put on a full bodysuit and mask to prevent injuries. Employees then show you a safety video to understand the rules and regulations of Smash Therapy.

“Surprisingly we have not had any major injuries. The worst thing that has happened was some glass through a shoe that caused a cut. They just put a band-aid on and continued” Shortino said.

Smash Therapy has multiple rooms of various size to accommodate small or large parties. There are two normal sized rage rooms and two other rooms, one larger and one smaller. The normal sized rooms allow two people to go and choose how they want to smash their objects. They can choose from metal baseball bats, crowbars and sledgehammers. The smaller room is rarely used; the larger room by contrast is usually reserved.

“Corporate parties are one of the biggest things for us right now. We get a lot of company parties come in here to relieve some stress that builds on from work,” Shortino said.

Before opening Smash Therapy, Shortino did a lot of research in order to find out how profitable these businesses could be. He even traveled to Toronto to visit a “rage room” that was growing in popularity to get ideas for Smash Therapy.

“This might be the most successful Rage Room in the country, which is crazy because you have them in locations like Los Angeles, Miami and other big cities. A place that not many people have heard of is the biggest one, and our success is mainly from our marketing” Shortino said.

To maintain his success Shortino constantly looks to make improvements. When they opened, they had what was called a smash wall made out of wood. But it often got damaged from the destruction that occurs. Shortino soon improved the wall from wood to metal, which gave the smash wall an improved usage span from a few weeks to a few months. Little improvements like this help keep Smash Therapy successful.

Another improvement Shortino knew would have to be made is how items are procured before they get destroyed. When he first got ready to open the business he collected items that were scrap. He went to garage sales to get glass items cheap. Now Shortino has a partnership with Sun King Electronics, which brings in shipments of old copy machines, stereos, printers and other items. After the destruction, Sun King comes to pick up the remains and drop off a new shipment. Shortino also gets glass and smaller objects from Goodwill.

All types of people show up to Smash Therapy for various reasons, Shortino says. Some people go to have fun, others go to blow off steam and some go with pictures of their ex to tape to the objects to smash. Smash Therapy is a business that potentially privatized an emotion, and they seem to be doing fairly well.