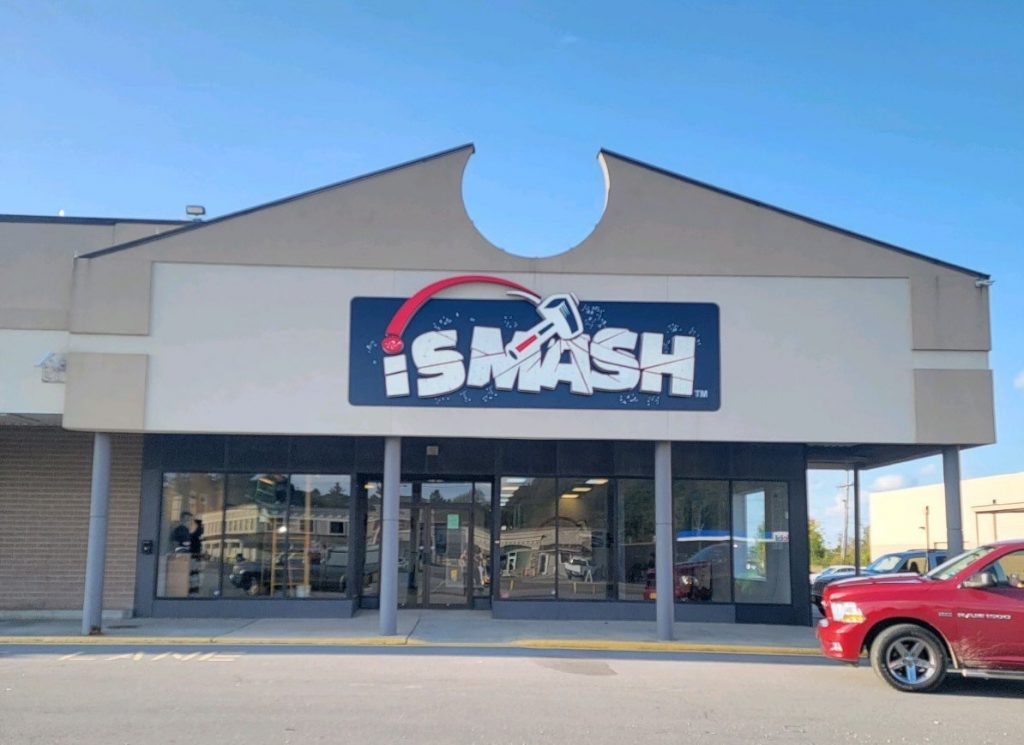 When Smash Syracuse first opened in Destiny Mall earlier this year, it was all the rage.  Customers were lining up to experience this novel entertainment concept and the fun, excitement, and emotional release of using baseball bats, crowbars and sledgehammers to smash household items like glassware, dishes, and electronics in a safe and controlled environment.  The company’s success was short lived, however, when mall management forced it to close just two months later because of noise complaints from neighboring tenants.  But instead of accepting defeat, today the owners are celebrating the grand opening of their new and improved entertainment center in Westvale Plaza.

Now called iSmash, the company is part of an emerging chain of amusement centers with plans to expand nationally.  The new location in Syracuse is much larger and better configured for the types of activities offered.  The extra space means the company can accommodate more customers and larger groups, including birthday parties and corporate events.  As an iSmash center, the company offers more than just rage rooms.  Customers can also book glow in the dark “splatter paint” sessions, a fun and silly artmaking activity that’s great for people of all ages.  And in a few months the company plans to add axe throwing lanes to its offering.

“We’re really excited about this new space,” said owner, Jerod Schoonmaker, adding, “of course it’s great just to finally be open again, but now we have an even better setup, more to offer our customers, plus we’re part of a growing national brand.”  iSmash has big plans for its new Syracuse location over the coming months, including special promotions, contests and giveaways, and community events.  Customers can book online at ismashusa.com, and walk-ins are accepted subject to availability.  iSmash Rochester is located at 2104 W. Genessee Street in Syracuse, New York.

About iSmash
iSmash is an emerging chain of amusement centers offering rage rooms, paint splatter art, and axe throwing activities, with locations in Rochester and Syracuse, New York.  The company is aggressively expanding, with new locations underway and plans to begin franchising nationally in Q4 2021.  For more information, visit ismashusa.com.