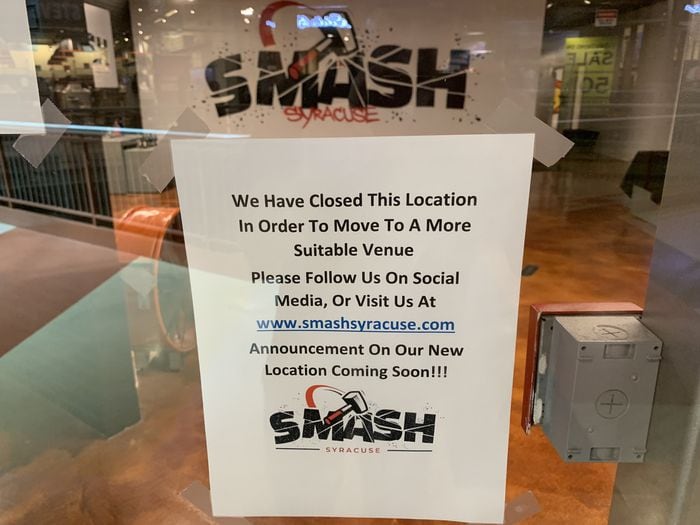 Syracuse, N.Y. — A business that allowed customers to smash glass bottles, old appliances and other stuff to relieve stress says it got the boot from Destiny USA this week after neighboring stores complained about noise.

“We received notice that we are no longer permitted to operate in our current location,” Smash Syracuse posted, below a photo of a pair of boots, on its Facebook page.

“Don’t worry, the real kicker is, we have a Bigger and Better location secured! We will let you guys know where as soon as we can, but we think you’ll be happy with our choice. Can’t wait to see you all, let’s bring back the SMASH to Syracuse.”https://www.facebook.com/plugins/post.php?href=https%3A%2F%2Fwww.facebook.com%2Fsmashsyracuse%2Fposts%2F463754654855102&show_text=true&width=500

“I can confirm that they were tenants of Destiny USA and that they had become a little bit of nuisance to other tenants,” said Nikita Jankowski, a spokesperson for Destiny.

Owners Steven Shortino and Jerod Schoonmaker opened Smash Syracuse on May 1 on the second floor of the mall’s newer section, the same floor where many of the mall’s entertainment tenants are located.

The store billed itself as a way for people to relieve stress by smashing things with baseball bats and other clubs in one of four “rage rooms.” Loudspeakers in each room allowed customers to play their favorite music as they smashed. Customers could even purchase video recordings of their smash sessions.

“Life’s too depressin’ to be stressin’,” the store says on its website.

Shortino opened an identical business, Smash Therapy, in a shopping plaza in Rochester in 2018.

But within 48 hours of the Destiny store opening, mall management reported receiving complaints from other tenants about the noise customers were making as they smashed bottles, old printers and other electronics, kitchen appliances, old car windshields and other things provided by the business or brought in by the customers, said Joseph Borland, a spokesperson for the Smash Syracuse.

Borland said mall management did not tell the store who the complainers were, but he said he suspects it was non-entertainment stores below the business on the mall’s first floor.

Destiny managers forced the business to limit its hours to when most of the rest of the mall was closed, until the store fixed the noise problem by installing soundproofing, he said. That meant, for example, that the store could only open from 9 p.m. to 1 a.m. Thursday through Saturday, 6 p.m. to midnight on Sundays and 7 p.m. to midnight Tuesdays and Wednesdays, according to Borland.

The odd hours killed the store’s business, with sales 70% lower than those at Smash Therapy in Rochester, he said.

The store installed soundproofing, but mall management said the noise was still a problem and refused to allow the business to open during normal hours, Borland said.

Shortino and Schoonmaker don’t deny that the business caused a lot of noise, but Destiny’s managers were aware of the nature of the business before agreeing to the lease and chose the location for the store, he said.

He said the business is in the process of signing a lease at a location in a Syracuse suburb and hoped to make an announcement soon. However, the business is out the $60,000 it invested in the space at Destiny, he said.

The store will be contacting customers who had booked a “smash session” at Destiny or have unspent store credits, according to its Facebook page. Gift certificates will be accepted at the new location, it said.